A few months ago, one of my best friends just casually mentioned that he stopped in Mexico to get four crowns done for US$250 each. Then, two more friends raved about their visits that I knew nothing about, and a friend in Grande Prairie told me she’s heard “so many amazing stories about some of the dentists there.” That was enough for me to book an appointment. Remember that I’m extremely skeptical and suspicious. As I’m self-employed, I have no coverage for anything dental from anyone. However, saving money does NOT trump buying problems. But I couldn’t have been more mistaken in my hesitation and am now choked I didn’t know about this secret dental heaven decades ago.

Yuma, Arizona is located right at the corner of California, Arizona and Mexico. Just across the Mexican border is a town called Algodones. It’s the medical centre of the Western United States. From optometrists to stem cell therapy, and chiropractors to dentists. In fact, there are well over 350 dentists in Algodones. NBC Los Angeles calls it “the pilgrimage to nowhere and the best kept secret in the West.”

From October to April, their busy times when way more than half of all dental patients are from Canada. Who knew? I certainly didn’t know – and had never heard of Algodones.

Here, just like the U.S. and Mexico, not all dentists are the same. The one that my friend had experience with, and who I visited and highly recommend, is Dr. Maria Fonseca, DDS (I’ll post her business card, along with more details of my trip online. ) dental_fonseca@hotmail.com

To make it happen isn’t complicated. I checked into a Yuma hotel last Sunday night and drove to a huge parking lot at the border Monday morning. For $6 I parked on the U.S. side and walked the equivalent of three blocks to the dentist (Or it’s about a 2 ½ hour drive from San Diego). No passport control, no Mexican immigration – just come on it. From the time I left my hotel room to the dentist’s office was 30 minutes.

While I was certainly a little apprehensive, that didn’t last long. Most of their offices are two-chair sole proprietors and everything is as modern, or nicer, than I’ve seen here in Canada. All the posters on the wall were in English, as were all the forms and receipts. It certainly helped that Dr. Maria has over 14 years’ experience, and is as professional as she is nice and thorough in her work and explaining each step and procedure.

“Potentially, there could be a problem. It’s buyer beware…” is the comment from the American Dental Association to NBC Los Angeles, and I’d bet the Canadian arm would make the same comment. Fair enough comments to protect their dentists. However, my response would be that I’m not trying to save a few bucks on a heart transplant or kidney operations. It’s also buyer beware at the Dollar Store and this is not life-threatening, but only a root canal, fillings, a cleaning and/or crown.

Here are a few more details if this is something you might want to consider:

Dr. Maria Fonseca, DDS: I chose her, as already mentioned, because of the first-hand experience from someone I trusted that had been to see her a few months prior. She’s also not someone who hires hustlers at the border to pass out flyers or the likes. (I would never consider dealing with someone who resorts to that!) She’s experienced, and thoroughly professional. Do your own due diligence, but if you want to contact her, the information is on her business card below. Who knows, maybe I’ll see you there in October for my next planned visit.

Why is it less expensive? The dentists in Algodones have the same training and education as those in Canada and the U.S. What they don’t have, however, is the massive overhead of the other two countries. From staff costs to taxes, rent, insurances, etc. their cost structure is just so much less than Canada and the U.S.

My root canal: On removing one of my 20+ year old crowns, that tooth needed a root canal. My dentist made a call to the specialist, and a runner from the Endodontist office came to pick me up within five minutes and walk me the one block to their office. (Dr. J. Enrique Arenas) Tell me the last time any specialist was able to see you in five minutes…five months – maybe…Their offices were THE most nicest you could imagine. It was also a two-chair/two room dental office with incredibly modern equipment, including a 60+-inch screen to view the x-rays. The root canal on tooth 16 took about 20 minutes, and they did show me the final X-ray (before my dentist could put the crown on that tooth.) While the work was professional, as was a great assistant, their office wasn’t – at least on the day of my visit. Five or six staff were standing inside the office where I was in the chair for no reason. They were chatting and texting with lots of “pings” in the background of their incoming texts. Two different people may have been the Endodontist – they never did introduce themselves. That was the “not very professional” part of their half hour with me.

When to go: ‘Rush-hour’ in Algodones is from October to April with all the snowbirds in Arizona and California. If you’re walking across the border to Mexico, that’s never a problem. If you’re driving, it can be one or two-hour delays to get back into the U.S. past Customs & Immigration.

How long will it take: Who knows – because that depends on what you need or want done. If it’s a crown, remember that every crown has to be custom made in a lab. That’s one day in between your appointments. In my case, the long appointment for all my work was the Monday, with a two-hour return trip on Wednesday to get the six crowns fitted and put on. If it’s an implant (that I should have done on my next visit) it’s one appointment to pull the tooth and insert the pin into the bone. That has to set and heal, so your next appointment won’t be until four months later (or when it fits your second trip back.) The total for that, by the way, is US$800 for the implant and US$300 for the crown over the implant. Of course, fillings, cleaning, or a root canal that may be necessary are all one-day issues. 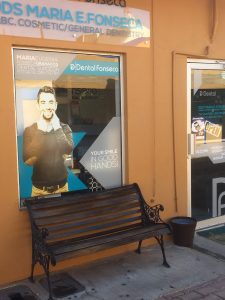 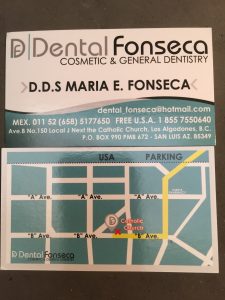