The end of this week will be six months from when I (tried to) open a CIBC business account. When their slogan is: Banking that fits your life – that isn’t quite what I thought it would mean…

Friday October 6th I finally decided that the TD expose from the CBC Go Public story that I had been talking about for a long time meant I couldn’t really deal there anymore. It seemed like a pretty simple thing to just go to the CIBC two blocks from my home and set up an account there. After all, I had a business account a few years prior. Well, not so much…

The “small business advisor” took over an hour. She claimed it was a new software system, but she could have been incompetent – I have no way of knowing. She finally set up the account, and I went to the branch ATM to make an initial deposit of $20 to make sure the account existed, and the ATM card worked. Since you NEVER want to close one account BEFORE you open the new one (as you can’t run your business without a bank account) my next stop was the TD to close my account. As they wouldn’t waive the seven bucks for a bank draft (gee – wonder why I was leaving?) I took the $2,505 balance in cash, walked it right over to the CIBC, and made another ATM deposit. Before lunch, I thought everything was now set.

The following day, I wrote a cheque on the account and had my credit card merchant account switched to the CIBC. By Monday, I realized there was a problem. The pre-lunch deposits from Friday hadn’t shown up in the account. By Tuesday, I was in a panic: Not only was a cheque from the weekend about to bounce, but the deposit was in cash, and it was clearly missing. You cannot imagine the stress as I checked the online account almost every hour. No, your bank isn’t liable until they verify it and credit it to the account.

Back to the branch, where the same small business adviser was just rude and had absolutely no interest in helping me. So I asked who the branch manager was and managed to see her: Deposits into the ATM got picked up at 2 PM on Friday. Picked up? Well, it turns out the CIBC doesn’t empty the ATMs in-branch – it’s outsourced. Four days later and no money meant it could have been outsourced to India for all I knew! Then the manager dropped the actual bad news: Well, there’s a hold on all new accounts anyway. It was something that was never disclosed and wasn’t the case when I opened a previous business account in the same branch a few years earlier (in half the time…). Well, it should have been disclosed, and it’s in your documents…as she flipped through my account documents and couldn’t see it, either, then changed that to: …”should have been.” She then contacted the “small business advisor” who, to her credit, actually admitted “my bad” in her email response to the manager of why the hold was never disclosed at all.

When I indicated my previous account didn’t have a hold, her response was that “yes” it would have had one. Nope – don’t mislead me. She certainly could have checked the records in a few minutes to avoid misleading me. Well, every bank has that six-month hold policy – it’s federal law. Nope – wrong again. It may be your banks’ policy, but it’ not “the law.”

The media relations department of both the Financial Consumer Agency of Canada, and the Office of the Superintendent of Financial Institutions confirmed that it’s absolutely not true: “When you open an account, you must be supplied with a written copy of their policy on holding funds that are deposited by cheque. In addition, the financial institutions must also, in each of their branches, display and make available copies of their policy on holding funds deposited by cheque.” This, according to media relations advisor Annik Faucher. The information wasn’t supplied, and (at least this branch) has nothing posted or available.

Then things got worse when she told me: “The credit bureau will tell us in six months if the hold can be lifted.” Those were her exact words, and it’s sort of true, and a big fat lie. Credit bureaus sell credit scores (Beacon scores here in Canada called FICO in the U.S. Credit bureaus do not make credit decisions for the CIBC.) It was either a really clever line (I’m still finding out if this is CIBC system wide training of that phrase) or her idea. It’s very clever in that the bank will never need to be the “bad guy” in any credit decision! However, it’s totally false, and that was long after she was aware that I have a credit management degree, finance books in the U.S., in Spanish, and in Canada, and a radio program!

Realizing I didn’t really have an open account yet, I went to a different financial institution: The account took 20 minutes to open and there were no holds on the account. I went home and ordered cheques online, received those cheques three days later, wrote a cheque on this new account, AND had this cheque cleared through the new account ALL before the CIBC had even released the hold on my cash deposit! No, I couldn’t believe it either – so the scans of them are posted below.

On October 17th, I received her email that “back office” had authorized the release of funds. ELEVEN DAYS AFTER A CASH DEPOSIT and it was still by special authorization!!??

So here we are, the week of finding out if I actually have a useable account. I’m already out six months of service charges to await this Friday’s decision. I have my beacon score, and it’s certainly high enough not to have a permanent hold on my deposits (that, ironically, are mostly from governments and the top 100 corporations in the country…).

I’ve heard from some of you about your own CIBC horror stories. Unfortunately, it’s always difficult to use them as I don’t have the facts. This one was easy to use as it happened to me personally and I have all the documentation. If you’re switching your company banking, be really careful!

In a response to some of my questions, Alberta VP Tom Wallis partially responded that the bank policy was to inform clients of holds, that ATM transactions are processed by the CIBC, following “industry best practices,” and that credit bureaus “do not set limits on client accounts.” The CIBC Media relations and their Ombudsman’s Office chose not to respond to my numerous requests.

Added subsequently: And it turns out that the CBC Go Public program now has some updates on their banking expose related to the CIBC with the headline: Regulators warn that banks are not there to look after customers’ interests. Here’s the link to their story: http://www.cbc.ca/news/business/cibc-financial-advisor-reacts-to-fcac-report-bank-sales-culture-1.4625096 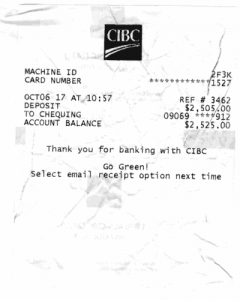 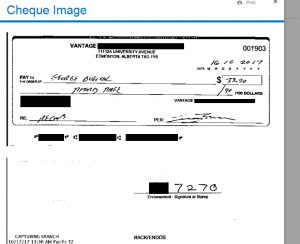