I’ve had frequent feedback on my $39 cell plan. Likely from people who are around the $100 a month mark on theirs. Mine is FIDO with talk, text and very little data. (New customers and plans start around $45 a month now).

If you want, but I would NOT rush right into it, you may be able to get a free cell phone plan.

There’s a new cell provider – sort of. It’s Shaw Mobile – you may have seen or heard their ads in the last few weeks. Shaw Mobile isn’t actually new – just a new rollout. Shaw purchased Wind mobile in 2016 and re-named it Freedom Mobile with about a million subscribers. Now they are expanding to Shaw Mobile, but appear they will leave Freedom in operation, too.

Shaw’s introductory offer if you’re a Shaw internet customer living in BC or Alberta is a free cell plan with unlimited text and talk. If you want data, it’s $10 per gig and it’s good for 90 days if you don’t use it all each month. If you’re like me and don’t watch movies or endless YouTube clips, that is plenty of data! If you want almost unlimited data, the introductory rate is $45 a month with 25 gig of data.

-If you’re on a contract with someone, you’re not a free agent and are stuck. It’s the reason I keep harping on never signing contracts.

-The other bad news is that this is an introductory offer. It won’t last and that’s one of the reason I won’t switch. If the real rates explode, I’d be stuck with a higher rate than I currently have. So I’m going to wait until the real rates show up.

You need to also know a couple of other things:

-The rollout is brand new. There are always bugs and problems. If you need your phone – don’t consider switching until the bugs are solved. And read the review below!

-You must live in BC or Alberta to get the cheap rates.

-The switch to Shaw needs to be made in-person at a Shaw retail store. That means you’ll likely line up for one or two hours! Do NOT leave until you’ve tested your internet and an incoming and outgoing call. There are lots of stories that you’ll need to go to the back of the line if it turns out your phone isn’t working!

-Yes, Shaw sells phones, too, including Iphones and Samsung. But the plan offers are based on bringing your own phone.

-You’ll have a $20 admin fee – which is reasonable for the industry.

-It’ll be 4k (speed) so you’ll have good service if and when everything works.

-All plans come with voicemail and caller ID

The reason Shaw can (maybe) end up with lower cell rates is that they’re already getting a ton of your money from your internet subscription. Plus they have over 100,000 wifi hotspots across the country. If you cell isn’t catching one of those, it’ll automatically switch to Shaw’s LTE network.

Because I do need my phone (as I don’t have a landline) this review, along with not having the real rates yet assures I won’t even consider switching right now:

SHAW MOBILE!!! Don’t switch from your current provider!!! What a disaster! I switched from my mobile company to Shaw mobile. Shaw texts me my first bill @2am – 6 hours after I signed up. My phone keeps switching between nationwide and no service. I talked to a representative after a lengthy hold and was told that this is new and there are some kinks to work out. Could I be patient and wait longer. Are you kidding me? I need my phone to do my job! After no service for over 12 hours I ported my number back to my original carrier. (edited for spelling)

Almost every add, from every cell carrier, comes with the promo line of getting a “free” phone. Well…not so much. What it actually comes with, if you read the fine print, is a two year locked in contract at a BIG price.

Not paying for a new phone up front has no connection to “free” over those two years. Plus, all those contracts come with BIG early termination penalties. I would never sign one of those. For me, it’s always critical to stay being a free agent!

My current carrier is FIDO. They are the 2nd tier small sister of Rodgers. Because they just sent me this “free” offer, I’ll use them as an example. All other 2nd tier carriers will be about the same. All first-tier carriers like Telus, Bell, and Rodgers will be similar, just more expensive.

My cost is $40 a month because it’s an old month-to-month plan. New customers who bring their own phone can get it at $45 a month right now. The current promotion is double the 1 gb date to 2 gb, which is plenty if you do not live on your phone with youtube or watching movies. It’s unlimited texts and talk.

You can get a $15 a month plan if you bring your own phone. It has a tiny amount of data (250mb) enough to check stocks, short google searches, the weather, or hockey scores a few times a day. It’s unlimited texts but no call minutes – so you’ll pay 50 cents a minute.

Do the math on any plans with any carrier and it’ll take you less than a minute to see if your free is actually free…it isn’t – anywhere from anybody. There’s no such thing! How much you want to pay is up to you and your wallet.

Oh, and I’ve mentioned them before: I get mine out of Winnipeg from TB Cellutions. Here’s their link on eBay Canada again:

Some Things That Will Cost Less This New Year

4K Televisions: If you haven’t seen one, you should. The resolution is two or three times better than a high definition TV. But these 4K TVs were in the thousands of dollars just a year or so ago. They’re dropping quickly – as everything in electronics does! Walmart in the U.S. now has the Avera 49″ for $249. That won’t be the Canada price, but you can use it as a guide.

Small cars and sedans: California sells in a month what Canada sells in a year. So the U.S. sets price trends and U.S. customers are still buying SUVs and big vehicles like crazy. That makes you crazy smart if you buy a small car or sedan that isn’t selling. They’ll see price reductions and rebates the entire years. And you’ll be even smarter if you buy a two or three year old!

Some groceries: Beef, veal, fruit, and eggs should see a decrease this year, according to the department of agriculture. That’s assuming normal weather and, in the case of most fruit, a stable exchange rate.

Certain Apple products: If you’re an Apple fan, the second half of the year should bring a bunch of price drops on Apple computers, iPads and phones. And what nobody seems to know is that the Apple website has a hidden section where you can get refurbished products right from the manufacturer at great prices!

Airline tickets: According to Expedia,  2017 will give you lower prices and more selection. Supposedly prices should be those of 2012, which would be great! Anecdotally I’m seeing that already with three flights I booked in the last week.

Cell plans: Rough rule of thumb is that you need to re-shop your cell plan every 18 months or you’re probably overpaying! The competition is heating up again, in the U.S. any contracts are gone, and Wind is trying to increase their business a lot since Shaw bought the company!

Can you save three dollars this (third) week of January? OK, can you save four bucks next week?

The 52 week saving challenge was put out by the budgetnista blog. The challenge is to save a dollar in the first week, and add a dollar for each week after that. You’ll have almost $1,400 saved at the end of the year – one dollar at a time. I don’t know about you, but that’s a lot of money, and it starts with a buck. 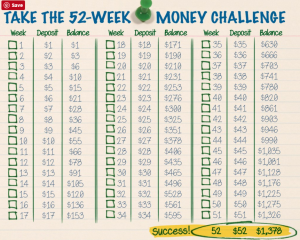