Having a decent credit rating in today’s society really isn’t an option – it’s almost a must-have. Apartment management companies will make their decisions based on your credit score, bonding companies, large numbers of hiring managers, not to mention all financial institutions, for everything from opening an account to your ATM limit, a credit card, or loan, will pull your credit score.

That makes it critical for you to get and keep a decent and clean credit report, or to rebuild it after something has gone off the rails. You HAVE to read the credit score and the building credit chapters in the Money Tools book. That $20 investment at Mosaic on Bernard or Amazon will literally turn into thousands of dollars saved on any financial stuff – or even getting the job or apartment you want!

The simplest way is through either a small limit credit card of a cash-collateral loan. The smaller the financial institution, such as a credit union, instead of a bank, the more they’ll help. Sorry, but to the banks, you’re one person out of the ten million credit cards they already have – and they can do without one more. Get a credit card with a $500 limit and never charge more than $100 on it. You need to keep your balance at less than 20% of the limit. In a year, they’ll increase your limit and inside a year and a half, you’ve got perfect credit if you don’t start applying at a dozen other places and going badly into debt.

Don’t believe me? Below is a print of the credit score of an 88 year old. Less than two years ago, she needed a small credit card. That’s exactly what I set up for her. Today, her credit score is 832! 850 is a perfect score, so she’s in the top one percent of the country at age 88, in a nursing home, living on old age pension!

If you need to first heal your credit, a cash-collateral loan is borrowing $2,000 or so but leaving that $2,000 with the lender as collateral. Set it up for 12 months and the tiny bit of interest you pay is worth the cost to re-establish your credit. First ask if they’ll do an RRSP loan. That’s a win-win-win to build credit again, save for retirement, and build your credit. But if they say no, it’s only because they cannot take the RRSP for collateral. Then, plan B is the cash-collateral loan. Once you’ve done that, don’t do anything else. Your bad credit will get older and start to drop off your credit report, but the new loan will be fresh, up to date, and reporting monthly to the credit bureaus. Don’t borrow more – you can’t speed up the calendar. Get this done and take a one or two year time out and you’ll be back on top! 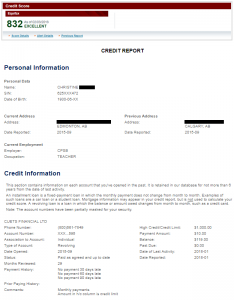 I’ve been using this trick with people for a lot of years, but I realized we’ve never talked about it. It’s an inexpensive way to start building credit, to re-establish your credit, or to save a ton of money for people who can’t seem to save on their own.

Would you lend me $100 if I gave you the $100 cash for collateral? Of course – because there is no risk or downside, and your profit is the interest you’ll make from me on the loan. Credit unions do these so-called cash collateral loans, and a few of the banks do, too.

If you’re starting to build credit, it’s most likely you’ll do it with a credit card. But good credit is two years or more with a higher limit. A new card with a $500 limit gets you started, but it’s a tiny risk, thus a very small start to building credit.

Anyone who has had a bankruptcy also isn’t going to be able to borrow for at least three years or so. If you’re discharged from bankruptcy or have no credit, go to a credit union for one of these loans. It’s also in the Money Tools book chapter of: How to rebuild credit. Get a $2,000 loan set up over 12 or 18 months and give them the loan money as collateral. You’ll make the payments at a low interest rate and, at the end of the term, get the $2,000 released back to you. At that time, you’ll have a great start to a rebuilt credit record, and for a good-size amount of money (called high credit). The larger the loan, the more it will boost your credit rating. But you have to be able to make the payments – each and every month!

It also works the same with an RRSP loan but you need good credit to get one. By tax law, the lender can’t use the RRSP for collateral if you don’t pay.

These cash-collateral loans also work for the wealthy. You’d be amazed how many of them have the cash flow to make their payments, but don’t save. I had one person last year that was going to get an $8,000 a month whole life policy. It’s meant to give an insurance policy and build in an investment component, but it’s one of the worst financial product ever invented!

When I ask any adult when they were last debt free, the answer is almost always that they haven’t been debt free since they were your age. When they were 18 or 19 – and they’ve been in debt since then. Sad but true – that’ll be you.

Getting wealthy comes much easier if you learn to say “I can’t afford it,” and spend less than you earn. When you were still in high school, you probably had a summer job or other income. You worked hard, had a goal of what you wanted to do with that money, saved like a dog, and paid cash for stuff. Plus, because you had so little money, you were careful how you spent it, right?

But now you have a paycheque, and access to borrowed money, which includes student loans and a credit card. So you’ve forgotten how to get rich already and you’re just getting going. Let me remind you again and maybe, just maybe, you’ll do these things to actually get rich, instead of just making that your 40-year dream:

Save ten percent of your money

Maybe someone in your family will print this out for you. Maybe someone cares enough to go over to Mosaic and get you the It’s Your Money book. Maybe I’ll see you at the top, or maybe I’ll get an e mail from you in five years or so to help you with some of your financial mess.

If you’re graduating from high school, it’s a valuable investment to establish credit. Read the chapter on how to do that and the credit card chapter to understand the rate, perks and limit traps that you’ll be dodging a lifetime.

Plus, leave your credit card at home – don’t pack it in your wallet. The first time you charge a consumable such as gas or food on your credit card and do not pay it in full when the statement arrives you’re in financial trouble. From there, it’ll just get worse. Miss paying off your balance and it’s twice as hard the following month when the balance has likely doubled. Then, the credit card companies have won and have you hooked for the next few decades.

If you’re just graduating from university, I bet you’re sick of living like a poor student and ready for some major spending. The biggest financial damage is done in the first year following graduation. Get the job, get the paycheque, but if you can delay gratification and live like a poor student for one more year, you’ll have an incredible amount of money saved in that year. Once you turn on the spending tap you aren’t going to be able to turn it off again – so just delay it one year.

Finally, there was a great article on the ten choices you’ll regret in 10 years. It includes avoiding change, trying to impress others, and giving up when the going gets tough. I’ll post the link on the yourmoneybook.com site. You should add one more: Not learning from your financial mistakes by denying them…

You can listen to George every Wednesday at 8:20 AM Mountain Time on Bell Media Radio: http://www.am1150.ca/
Get Connected!