Part of our run-away inflation is that we’re going to restaurants again – a lot! But servers are making less money than ever while working harder, and it’s something you didn’t know.

While your only contact is pretty much your server, behind the scenes are bartenders, hostesses, bussers, runners, kitchen staff and others who you aren’t tipping. Since you’re not coming into the restaurant with a wad of five dollar bills to hand out, those staff still do get a part of your tip. Different restaurants do it in different ways, but the most common in the industry is called tip-out. It’s a tip distribution system that does get some of your tip money to those other staff who are instrumental in making the server look good and able to function. In most restaurants and chains, their indirect tips have increased in the last few months when the restaurant increased the tip-out amount to a range of six to eight percent.

To translate that into English: A server who rings out (collects) $1,000 during their shift pays the restaurant an additional 6 to 8% over and above that. So they’re responsible for turning over $1070.00 if we use 7% as a tip-out. The server has collected a bunch of credit card charges, some gift cards, some cash, and tips. At the end of the shift, the computer adds up all of the charges for food, drinks, etc. that were charged to his or her swipe card (account) to come up with the total amount plus the added ring out. Whatever is left over is their real tip income for the shift. The seven percent is then distributed to those bartenders, hostesses, bussers, runners and kitchen staff (depending on how the restaurant has the people and the distribution percentages set up).

Walmart somehow also seems to think 20 is the new 15. But that’s not a good thing in the retail business. Again, lots of products have gone up in price. But not 25%! Like Covid and the Russian invasion of Ukraine (see the story from last week) became reasons to lie or use as excuses, it makes me wonder if retailers aren’t using this time to move up their profit margins under the radar…

There are lots of examples, but here’s my most obvious one. Once a year I buy a new pair of the least expensive jeans I can find. They’re for outside work season from painting to kneeling on the garage floor, or in the yard, and don’t last more than a year before I replace them. For a few years, that’s been Walmarts’ $15 jeans. These cheapest jeans I can find are $20 this year. No way – no how – no chance I’m paying that. Has Walmart’s long-standing campaign of “roll-back” pricing turned to “roll-forward?” It isn’t the price of denim, or any improvement in quality, or that much increase in freight costs….I’m sure they can still fit a few hundred thousand into each container leaving China…. But, judging by the empty racks, I’m very much in the minority in not swallowing a 25% price hike. Sad but true…

Update 5/25/22: Costco now has their own jeans under their Kirkland line for $17. The material is really good quality, they fit well and come in a wide range of sizes including odd numbered ones. Since they don’t have change rooms, buy them, and go into the washroom to try them on. Then you can exchange or return before leaving the store.

Senator Elizabeth Warren has been promoting this idea for over a year in the U.S. But what about here in Canada? The post office is not exactly a growing business, but a very necessary one that isn’t making money, keeps charging more, and isn’t going to go away in our lifetime.

The post office is already a vast network of locations all across the country. They’re in remote areas that aren’t even serviced by a bank. Why can’t the post office sell prepaid debit cards, do cheque cashing, incoming and outgoing foreign money transfers to relatives, small loans and the likes?

Even if it just re-directs 10% of people from payday lenders or cheque cashing places it would save Canadians billions of dollars, rescue the post office and a ton of jobs there, become really convenient for people, and a new revenue stream.

Last year (2016) there were 430 million fewer lunchtime restaurant visits in the U.S. It has to be true in Canada, too, judging by the vast number of lunch ads from Boston Pizza to Subway, Tim’s and others. That’s a lot less eating out, or is it? Are we still buying at the lunch places but having desktop meals? That’s the slang for eating at your desk.

If you’re someone who has cut down, what I want to know is whether that money is getting saved, used to pay down bills, or just leaking out into some other “mystery” spending the rest of the week, in whatever, instead of food at lunch. Just because we eat out less, doesn’t mean we’re actually saving anything… 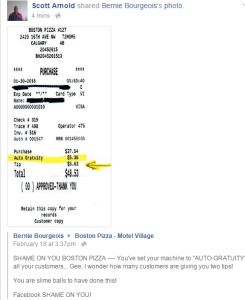